skip to main | skip to sidebar

The Sorry State of Cal State 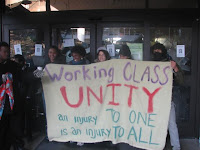 The cuts to the California State University (CSU) for fiscal year 2009-2010 are unprecedented. The public and even students applying to CSU don’t have an overall understanding of the devastating changes the university is undergoing. Here are some of the details of the impact of the $564 million budget cut which the CSU refers to as “restructuring”:

• Enrollment at the CSUs slashed by more than 40,000 students. No new students were allowed to enroll this Spring 2010.

• Demand to attend the CSU continues to rise. In just one year, the university has seen a 127% increase in the number of applications from community college transfers, and a 32% increase in freshman applications. (Office of the CSU Chancellor website)

• Severe reduction in financial aid, primarily Cal Grants, which is the funding source for many students.

• 2 day/month mandatory furloughs for all faculty and staff resulting in 10% decrease in salary and drastic decrease in student services to students.

• Threats of widespread staff and faculty layoffs to be announced during winter/spring 2010.

• Creation of additional, more rigorous application requirements including local residence requirements resulting from the classification of more programs and universities as “impacted.”

• The drastic shortening of enrollment deadlines. CSUEB used to accept applications for fall quarter up to within days of the start of the quarter. The fall 2010 application deadline was moved back to Nov. 30, 2009.

Manufactured Inevitability
Lillian Taiz, president of the California Faculty Association (CFA), said the CSU chancellor and his administration have failed to "confront elected leaders" or educate the public about the effects of the cuts. "Instead, they have embarked on a mission to restructure the university in ways that will profoundly affect the educational opportunities and experiences of Californians for generations to come," Taiz said. “What all of this means is that access to a quality four-year higher education–which is exactly what the CSU mission promises–is quickly disappearing.” (CFA, “Restructuring” the CSU or Wrecking It?,” Fall 2009)

Additionally, “the Chancellor’s office argues that restructuring is inevitable due to the budget crisis. We disagree. Clearly, where there is political pressure and political will, there is a choice. Just take a look at the trillions of tax-payer dollars that were spent last year on bailing out banks. There are other options.”
For Taiz, “There are serious long-term social effects that these changes will have, specifically on low-income people and communities of color. The provision of a broad liberal education for communities that might have no other access is at the heart of the CSU’s mission and that is the heart of what is under attack.” (Californiaprogressreport.com, Dec. 2, 2009)

Part of the mission of the California State University is that it promises to:
“Seek out individuals with collegiate promise who face cultural, geographical, physical, educational, financial, or personal barriers to assist them in advancing to the highest educational levels they can reach.”

The CSU system was founded to educate working class people and provide them with opportunities to make valuable contributions to society and earn a higher income in the process. What is happening now is nothing less than an attack on the working class, the disadvantaged and the poor. Now is the time to fight back and reclaim the rights of all people to a quality education, not just the privileged few. Without access to higher education, more working class people will be destined to low paying, dead end jobs and the state of California will not have the skilled, educated workers it needs to restore a thriving economy.

Barbara is a Career and Academic Counselor at CSUEB and a member of Academic Professionals of California (APC). She is currently experiencing a 10% paycut as a result of forced furloughs, possible layoff, and a dramatically increased workload.
Posted by Vote Ovetz for COM Board at 10:20 AM