skip to main | skip to sidebar

A Movement Erupts Across California 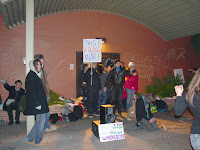 In 2007, the capitalist economy melted down and its internal weaknesses became exposed. The subprime mortgage crisis exploded, banks and insurance companies collapsed, all catching the public off guard. To pay for this crisis, mass layoffs and budget cuts have been taking place triggering a movement of resistance across California. Beginning on September 24, 2009, 5,000 students and campus workers protested at UC Berkeley. Building occupations, protests and walkouts soon followed across California on a number of other campuses. Following this wave of actions, a conference attended by about 800 people at UC Berkeley called for a day of actions and strike to begin on March 4, 2010 that is rapidly building momentum.

Movement 1, State 0
On November 19th, the UC Regents met at UCLA announcing that tuition will be raised to $10,000 a year, a 32% increase in one year. Students at UCLA fought back attempting to shut down the meeting and occupied a building. Other direct actions erupted elsewhere at the same time. UC Berkeley students and workers engaged in a three day strike and 1,500 students and community occupied a campus building, an idea originally proposed at the general assembly. Students at San Francisco State University (SFSU) engaged in a protest and sit-in. UC Davis and UC Santa Cruz joined in with their own building occupations and protests. UC Santa Cruz notably had a general assembly in the middle of street to stop business as usual and discuss what to do next. 400 students emerged from a teach in at Fresno State university and launched a walk out. On December 9th, SFSU students occupied the business building for 24 hours demanding and end to the war, a stop to the budget cuts, and other demands. They renamed the building after Oscar Grant, a young black father who was murdered by BART police on New Years Eve 2009. Hundreds of students became politicized in its defense against the police sent in to forcibly end the occupation.
The movement has spread to the community colleges and other CSU campuses by early Spring 2010. Students and faculty had a “walk-in” to protest the cuts at Den Anza community college on January 20th and students, faculty and staff at all three San Mateo community colleges had a two day teach in to protest the cuts. CSU-Northridge Chicano/a Studies faculty and students walked out and held a teach-in on February 4th. City College of San Francisco students, faculty and staff are planning a “study-in” on February 11th to demand a restoration of cut library hours.

March 4th: The Statewide Shutdown
City-wide coordinating committees have formed to organize for the March 4th strike and days of action. Santa Cruz, San Jose, Oakland, and San Francisco have begun flyering for and building for a day of strikes and walkouts. In addition to the UCs, CSUs and community colleges, several SF high schools also plan to walk out and Oakland teachers have authorized a strike on March 4th.
The movement has been characterized by extensive open debate over tactics and strategy. Some conservative unionists have spoken out against a one day strike and others have said that such committees are “dreaming.” Despite their attempts to put the reigns on the movement, the movement against the cutbacks is in the hands of the participants. Perhaps nothing will happen in the next coming months, perhaps a general strike across the state will take place when multiple institutions are shut down. What will determine the outcome is what people do before hand. If March 4th is one battle, what preparatory work will we need do to have a favorable outcome in this battle? Obviously if people don’t do much not much will happen. But if university, college and high school students are really organized for walkouts, teachers and faculty are ready to walkout out of their campuses, workers ready to stop working, then we can see the real potential power we all have.
The administrators need us, but we do not need them. The schools, and public institutions cannot run without the workers, students and teachers, making them run.
Posted by Vote Ovetz for COM Board at 10:19 AM